Wide, thin, chunky or boney, we all have a preferred preference when it comes to where we enjoy parking our precious derrieres.  For some it may be a brief moment in time, for others hours-on-end.  The sling slung to our sometimes-slouchy seats can vary with personal likes and have as much character as the characters postured in them.  Take mine for example; it is aged, yes both my precious derriere and my chair, and my chair has considerable wear; a tear in one of the armrest ingeniously concealed by one of my wife’s hand-made afghans, and if studied hard enough, you can nearly read every nuance in every crack, nook and crevice – and does it ever speak.  I dare slip my hands between the armrest and the seat cushion out of fear the dreaded Three-Eyed Leviathan of La-Z- Boy® will snatch me by the wrist and snare me in his grips.

But really, we all have a designated “favorite” chair, sofa, or other christened article of furniture we retreat to.  I am a writer, so it is not uncommon for me to spend hours in my chair.  Some people enjoy propping a couple of pillows up and sitting on the floor.  Others enjoy sitting in bed; they go, and go, and go, until they have no more to go then they collapse in a state of total exhaustion and sit in bed.  Many people I know say they hate sitting, but spend hours sitting in the car in traffic, not by choice I might add, but they could always do as people did in the days of old and walk, but then they wouldn’t have the pleasure of complaining about sitting in traffic.

One sunny afternoon, I was sitting on my Harley’s comfortable seat, riding down the road scanning the distance for any obstacles in the roadway, oncoming traffic, or anything that might be out of the ordinary.  Out of the corner of my eye something caught my attention.

I made a u-turn and double-backed to the dirt road leading to an entrance, a gateway, where I made my way to a bizarre abnormality ascending from the ground.  I scaled the masterpiece and poised myself somewhat comfortably on the sculpture, confident its owner would not be upset knowing I was there to pay homage to its creative genius, unparalleled uniqueness, and its deep sense of meaning.

As I sat atop the massive stone monument, I was bewildered.  I had never climbed aboard a headstone recliner before.  That’s right, a concrete cathedra memorial La-Z- Boy® smack-dab in the center of the small graveyard.  The gravestone virtuously paying homage to the deceased person’s most prized earthly possession – a true masterpiece!

I wondered; why did this individual desire to have this odd, but cool, monument designed in the shape of a recliner?  Then I began asking more questions.  Is there a hidden meaning behind the stone recliner?  Could it imply the deceased is sitting around waiting for something, or someone?  Is it an invitation?  Sit and come with me?

Perhaps he didn’t want his headstone designed as a recliner, maybe his spouse thought it would be the ultimate “up-yours” for his spending so much time sitting around the house and doing absolutely nothing.  That reminds me, I had better make sure I finish the honey-do-list today!

Upon further inspection, I noticed a few things.  Like the fact it faced west and a beautiful sunset was about to befall.  And it faced a river, how cool is that!  A riverfront view of a sunset, every day for eternity.  I am sure when the monument had been placed, the now backed up traffic from construction on the heavily traveled Route 25 was not a foresight, nor a consideration.

Noise from the heavy machinery plummeting the serene surroundings and pollution from the dust flying everywhere and exhaust fumes aside, I still could not get over the enormity of the stone recliner.  The implications alone were astonishing.  I read the inscription and then I spoke with a groundskeeper, it turns out two brothers were buried at this site – Loie (1880–1926) and Hal (1883–1952).  Rumor has it when the elder brother Hal passed the monument was erected replacing the earlier single brick stone over Loie’s grave.

Perhaps the greatest honored bestowed among two brothers is etched above their names “PALS”.  Considering the implications of a stone recliner facing the backdrop of a tranquil river, forever throughout eternity, reserved for two “PALS Loie and Hal, is sincerely a statuesque thought in and of itself.

To the less informed passing by, one may say, “What a cool monument!” Or one may even ponder the implications of dedicating such a headstone commemorating the pleasures and securities of a habitat reserved for gluteus-maximus and backside repose.   To Hal and Loie the stone recliner represents an eternal peace… visions of sunsets on the unburdened riverside!

This has been a… View From My Loft 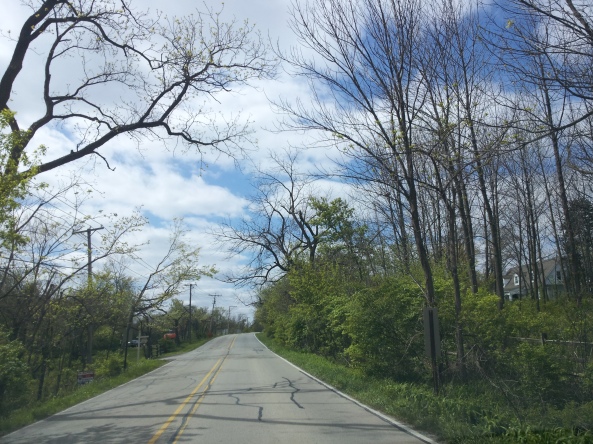